Barry Gallagher Chartered Architect and creator of the ZeroHome System has won a Green Apple Environmental Award in the international campaign to find the greenest companies councils and communities.

He competed against more than 200 other nominations in the Green Apple Awards for the Built Environment & Architectural Heritage, and was presented with his trophy and certificate for the “Zerohome System” project at a glittering presentation ceremony in Empire Casino,Leicester Square, London, on June 29th. 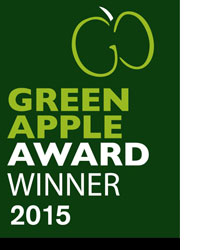 “Reducing fuel poverty and carbon footprint are two innovative concepts highlighted by Modern Builder magazine, bringing to the fore the aspect of affordable living.Creating affordable housing,enhanced property portfolio,whole life costs and lowering maintenance costs are just a few benefits of this project.A programme has been launched to start training others in achieving and executing the environmentally-friendly formula across the construction industry”.

As a result of this Green Apple Award success, Barry has been invited to apply for the top global honour of a Green World Award and have his winning paper published in The Green Book ( the leading international work of reference on environmental best practice ) so that others around the world can follow his example and learn from his achievement.

Barry can also progress to represent his country in the European Business Awards for the Environment. 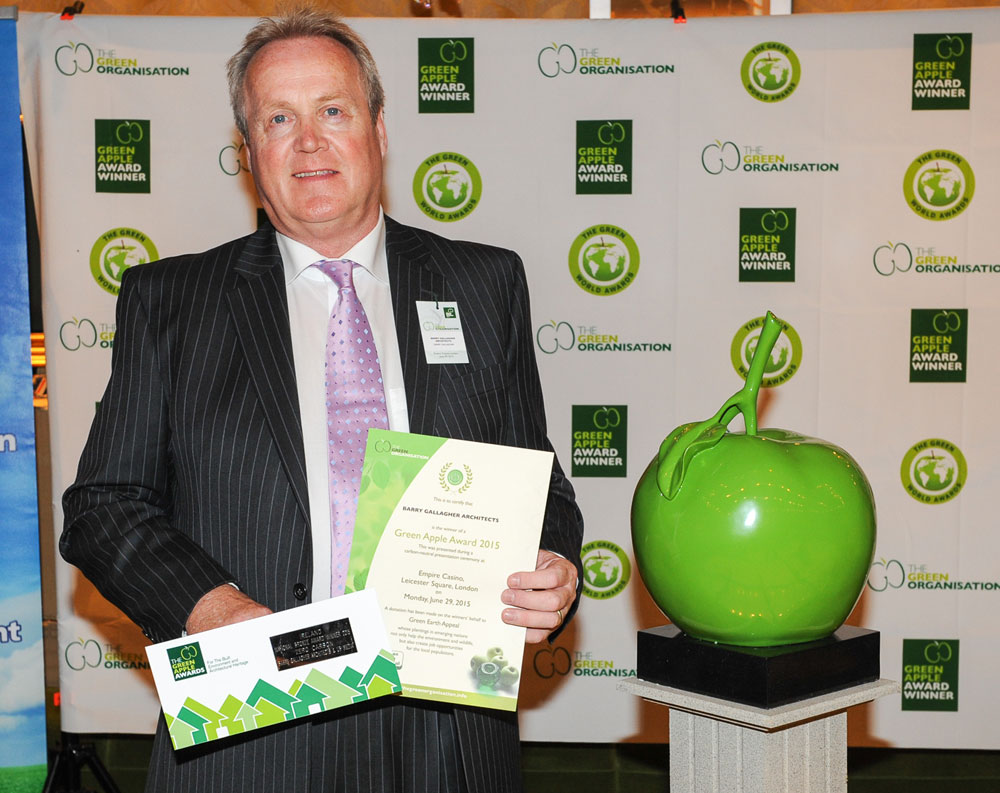 The Green Apple Awards began in 1994 and have become established as the major recognition for the environmental endeavour among companies,councils,communities and countries.

The awards are organised by The Green Organisation – an international, independent,non-political,non-activist,non-profit environmental group dedicated to recognising, rewarding and promoting environmental best practice around the world.

Barry an architect in Omagh for over 20 years has been involved in numerous prestigious projects in the area such as Pat Kirk Ltd Showrooms,Station Centre,Tara Centre, numerous Health Care Centres etc whilst being resident architect and adviser to Nestle UK ltd,Omagh until their closure some years ago.

In the past 9 years Barry has been actively researching and developing the “Zerohome System” on how best to achieve Zero Carbon Homes using heavy-weight traditional building methods and skills that are readily available,sustainable and affordable and matching this type of build to appropriate and suitable renewable energies.

In the past number of years Barry has completed numerous new homes using this method, a highly energy efficient Rectory, Cookstown, a true ZeroCarbon home outside Omagh which produces more energy than it uses and finally two affordable zero carbon Homes in Maghera which combines all the learning and test field results of work previously carried out and which received the Green Apple Award and recognition for it’s innovation.

“Zerohome System” an innovative A-Z Induction build process Barry has invented and which was incorporated into the award winning project, is based on a ‘whole-of-life’ design, that sets out to simplify rather than complicate and employs ‘a single-mindset’ from employer to end-user,masterials and modified construction methods with proven track records that improve energy efficiency,sustainability and functionality.The award winning homes are robust and built to last with a traditional heavyweight construction specification whilst incorporating renewable technologies that are easy to operate and deliver near zero energy costs. Barry is currently implementing the “Zerohome System” with a large Housing Association.

In going forward in his ambassadorial role Barry sees the future of his “Zerohome System” through education at all levels including Employers,Builders,Trades and End-Users as we must embrace the truth that “It must do what it says on the tin”.

Barry sees an exciting future for “Zerohome System” as it offers affordable future-proofed houses that are built using sustainable materials/supply chains,traditional methods of heavy-weight ( whole-of-life) construction that maximise fabric heat containment yet are robust and incorporate uncomplicated renewable energies that are easy to operate yet have minimal maintenance.

“ Recognising our culture and lifestyle these simple and uncomplicated yet highly energy efficient homes will allow home owners to play their part by changing lifestyle and becoming more energy conscious in running and maintaining their home and it is this that is so crucial to success in planning our homes of the future.The need for a control mechanism that stabilises the thinking in terms of every design meeting their goal has to happen and my “Zerohome System” understands this and has using a clear strategy of A-Z induction,good design,coupled with a well written performance specification and an ethos of collaboration between all parties in the design process implemented this approach into the Maghera Project which led to this Green Apple International Award”.